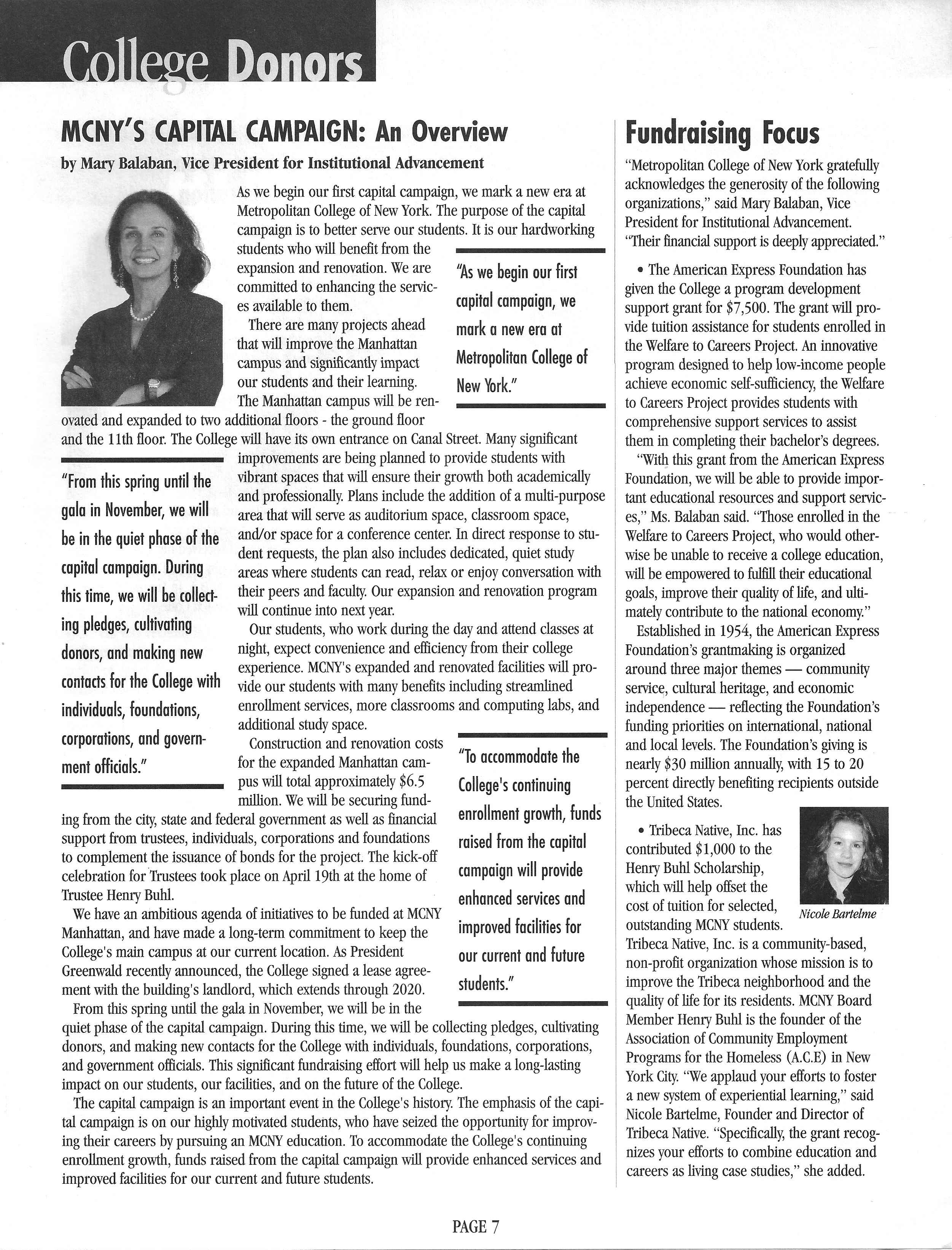 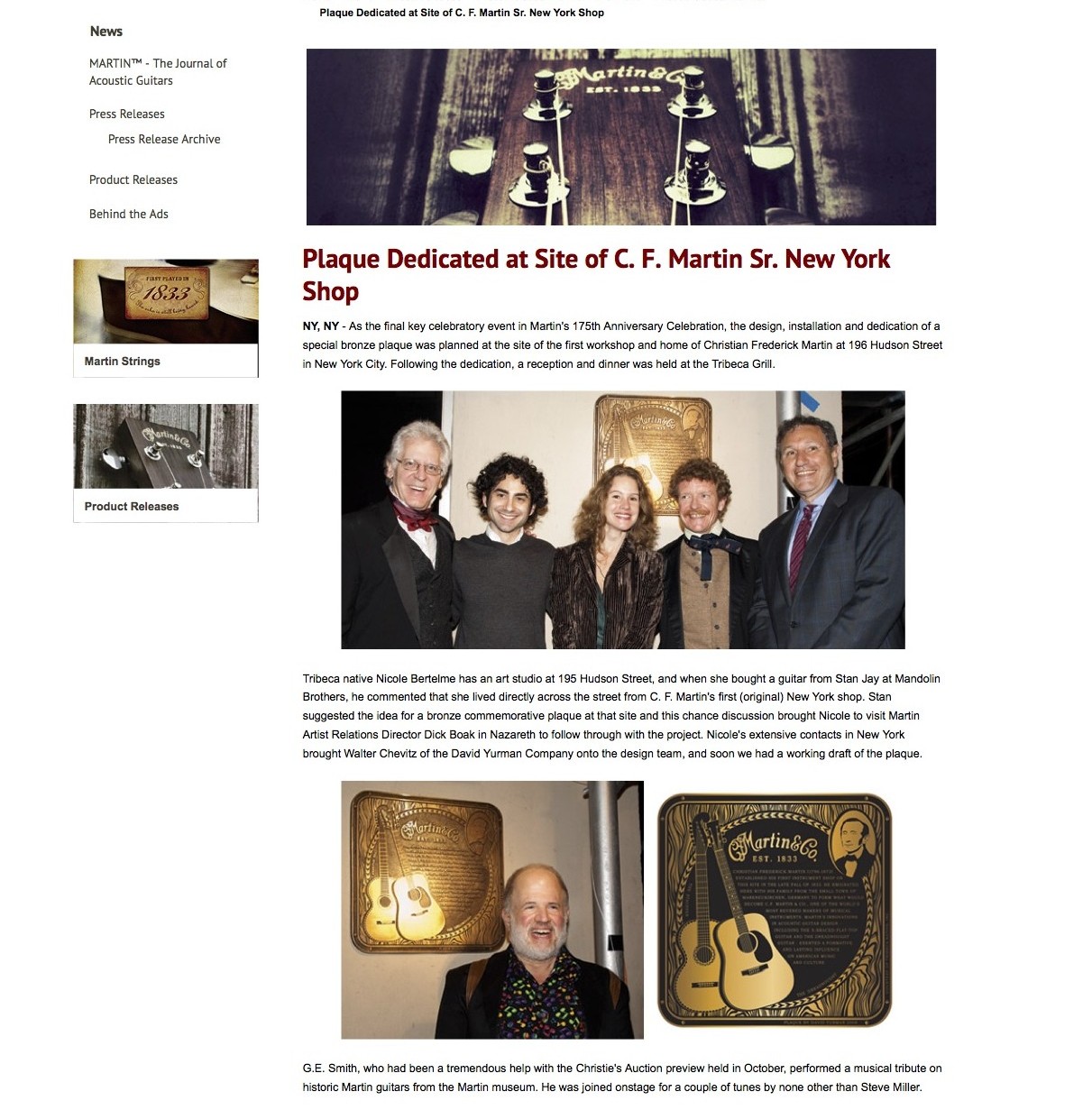 Carl Glassman / Tribeca Trib
Christian Martin IV, the current CEO of guitarmaker C.F. Martin & Co., tells a crowd of his friends and co-workers about his great-great-great-grandfather, Christian Frederick Martin, who founded the company in 1833 after leaving his native Germany.
You just might have caught a melodic earful if you happened to pass the corner of Hudson and Vestry Streets back in 1833. It was there, in November of that year, that a young German woodworker began fine-tuning the first of what was to become a long line of prized, highly sought-after guitars.

His name was Christian Frederick Martin and for six years he sawed, sanded and strung his intricate and often lavishly designed guitars on the first floor of a three-story wooden building at 196 Hudson St.

Earlier this month, his great-great-great grandson, Christian Martin IV, a 6th generation descendant of C.F. and CEO of the Nazareth, Pa.-based company, returned to the site, now a 12-story office building with the address 200 Hudson St. Martin, and a crowd of the company’s employees and friends, were there to dedicate a plaque commemorating his ancestor’s arrival in New York 175 years ago.

Nicole Bartelme, founder of a nonprofit fundraising organization called Tribeca Native, was buying her first guitar in a Staten Island shop in 2005 when the dealer noticed her Hudson Street shipping address.

“He said, ‘Do you realize 196 Hudson is the first location of the Martin guitar shop?'” Bartelme recalled.

Bartelme, whose apartment is directly across the street from the site of the old Martin workshop, proposed the idea of a commemorative marker to Martin and Trinity Real Estate, owner of the building. Dick Boak, Martin’s director of artist relations, told her that the upcoming 175th anniversary of C.F.’s landing in the U.S. would be the fitting time to do it.

Bartelme sees the commemoration as just the beginning of what she calls “Tribeca Trails,” an effort to celebrate historic achievements in the neighborhood. Funds raised at those celebrations would be donated to local causes.

“It’s a marker that signifies Tribeca Native’s initiative to have 16 other markers that will traverse through the neighborhood, very much like the Freedom Trail in Boston, or the Canyon of Heroes [sidewalk markers] along Broadway,” she said.

Donning period garb of the early 1800s and standing a the foot of 200 Hudson St., Martin said his family had spent the better part of two centuries trying to live up to the lofty standards of craftsmanship C.F. had set six generations ago, before moving his family and the then fledgling company to Nazareth, Pa., where it remains today.

“I’ve gotten up-close and personal with some of the guitars that C.F. built, and they are impeccably well-made,” he said. “In some respects, as sophisticated as we are regarding our ability to manipulate wood, we can’t build a better guitar.”